A NoSQL (originally referring to “non SQL”, “non relational” or “not only SQL“) database provides a mechanism for storage and retrieval of data which is modeled in means other than the tabular relations used in relational databases. Such databases have existed since the late 1960s, and include document databases, and XML databases, which along with object-oriented databases (OODB), focus on managing unstructured data or semi-structured data.  “NoSQL” became popular in the early twenty-first century, triggered by the needs of Web 2.0 companies such as Facebook, Google, and Amazon.com. NoSQL databases are increasingly used in big data and real-time web applications. NoSQL systems are also sometimes called “Not only SQL” to emphasize that they may support SQL-like query languages.

In computing, Master Data Management (MDM) comprises a set of processes, governance, policies, standards and tools that consistently defines and manages the master data of an organization (which may include reference data). An MDM tool can be used to support Master Data Management by removing duplicates, standardizing data (Mass Maintaining), incorporating rules to eliminate incorrect data from entering the system in order to create an authoritative source of master data.

Jean-Louis Gassée has some good questions, including… “Is Microsoft trying to implement a 21st century version of its old Embrace and Extend maneuver — on Google’s devices and collaboration software this time?” Read More 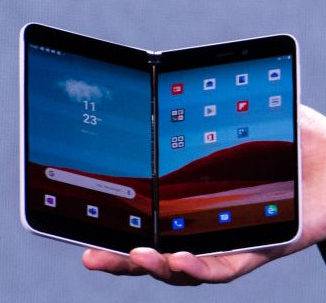 Integrated innovation and the rise of complexity

While Stephen O’Grady’ post isn’t addressing Microsoft‘s recent Surface announcements as Gassée was, it is an interesting companion, or standalone read. Read More

‘Ambient computing‘ has mostly been associated with the Internet of Things (IoT). There are many types of computing things. But the most important, from a world domination perspective, are those at the center of (still human) experience and decision-making; that is mobile (and still desktop) computing devices. The biggest challenge is the interoperability required at scale. This is fundamental to computing platform growth and competitive strategies (see Gassée’s question above). Ben Thompson analyzes Google recent announcements in this context. Read More

Attention marketers: in 12 weeks, the CCPA will be the national data privacy standard. Here’s why

Now it’s 10 weeks. Tim Walters makes a good case for his prediction even though other states are working on their own legislation, and Nevada has a policy already in effect. Read More

Artificial Intelligence (AI) is a branch of computer science that studies intelligent systems (i.e. software, computers, robots, etc.). Alternatively, it may be defined as “the study and design of intelligent agents”, where an intelligent agent is a system that perceives its environment and takes actions that maximize its chances of success. John McCarthy, who coined the term in 1955, defines it as “the science and engineering of making intelligent machines”.

For practical purposes, it is useful to distinguish between two different interpretations of ‘AI’:

“Machine learning is the science (and art) of programming computers so they can learn from data,” writes Aurélien Géron in Hands-on Machine Learning with Scikit-Learn and TensorFlow.

ML is a subset of the larger field of artificial intelligence (AI) that “focuses on teaching computers how to learn without the need to be programmed for specific tasks,” note Sujit Pal and Antonio Gulli in Deep Learning with Keras. “In fact, the key idea behind ML is that it is possible to create algorithms that learn from and make predictions on data.”

Examples of ML include the spam filter that flags messages in your email, the recommendation engine Netflix uses to suggest content you might like, and the self-driving cars being developed by Google and other companies.

Less than half of Google searches now result in a click

Some mixed news about Google for publishers and advertisers in the past few weeks. We’ll start with the not-so-good news about clicks, especially as it turns out, for mobile, detailed by Rand Fishkin…

We’ve passed a milestone in Google’s evolution from search engine to walled-garden. In June of 2019, for the first time, a majority of all browser-based searches on Google resulted in zero-clicks. Read More 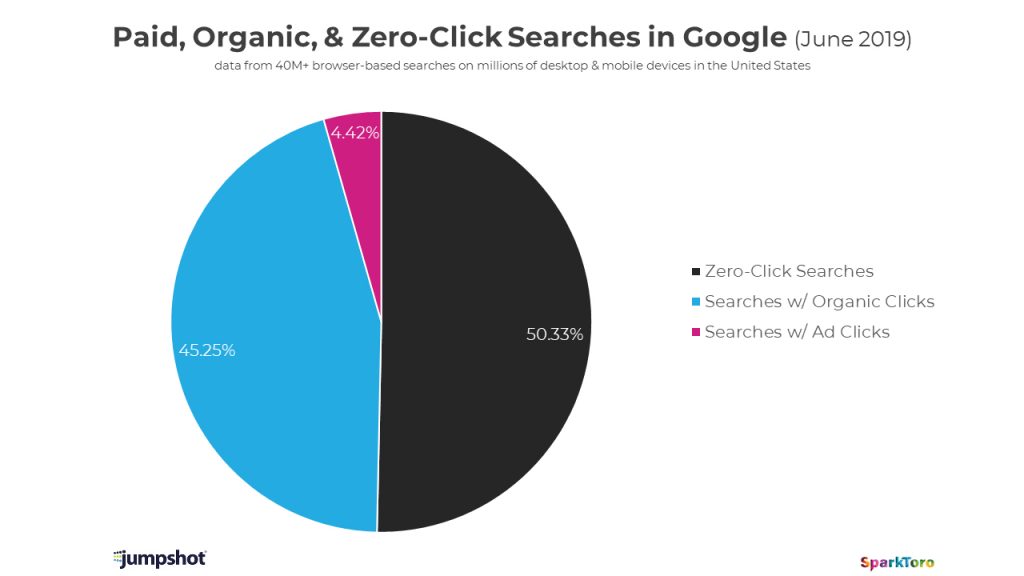 Nieman Labs’ Laura Hazard Owen provides some context on the most welcome change Google‘s Richard Gingras announced last week. Of course there are questions around what ‘original reporting’ means, for Google and all of us, and we’ll have to see how well Google navigates this fuzziness. Read More

The efficiency and effectiveness of multi-purpose content strategies are well known, as are many techniques for successful implementation. What is not so easy is justifying, assembling, and educating a multi-discipline content team. Content strategist Michael Andrews provides a clear explanation and example of the benefits of multi-purpose content designed by a cross-functional team that is accessible for non-specialists. Read More

This comparison turns out to be a familiar and fertile foundation for exploring what can go wrong and what we should do about it.

The article also serves as a subtle and still necessary reminder that face recognition and other machine learning applications are vastly more limited than what ‘AI’ conjures up for many. Read More

A few more links in this issue as we catch up from our August vacation.

An XML database a data persistence software system that allows data to be stored in XML format. These data can then be queried, exported and serialized into the desired format. XML databases are usually associated with document-oriented databases, and are a type of NoSQL database.

Relational databases and full-text search mechanisms that have been the backbone of many applications are not designed to manage XML content effectively. A new class of databases has emerged that is designed specifically to manage XML content. Typically called “XML Native Databases” or just “XML databases,” they incorporate functionality that greatly improves the management, searching, and manipulation of XML to produce the most effective XML data management solution.

The World Wide Web Consortium (W3C), the standards organization that developed XML, has also developed many standards that can be used to access, search, process, and store XML data. XML databases take advantage of these standards to provide efficient and precise access, query, storage, and processing capabilities not found in traditional database technology. The result is that applications using XML databases are more efficient and better suited for managing XML data.

Managing ML in the enterprise

Regulated industries are often among the first to figure out how to implement new technologies in complex, high risk environments. This O’Reilly article looks at how finance (mostly) and health care model risk in the context of machine learning. There are useful and important lessons for enterprises in general. Read More 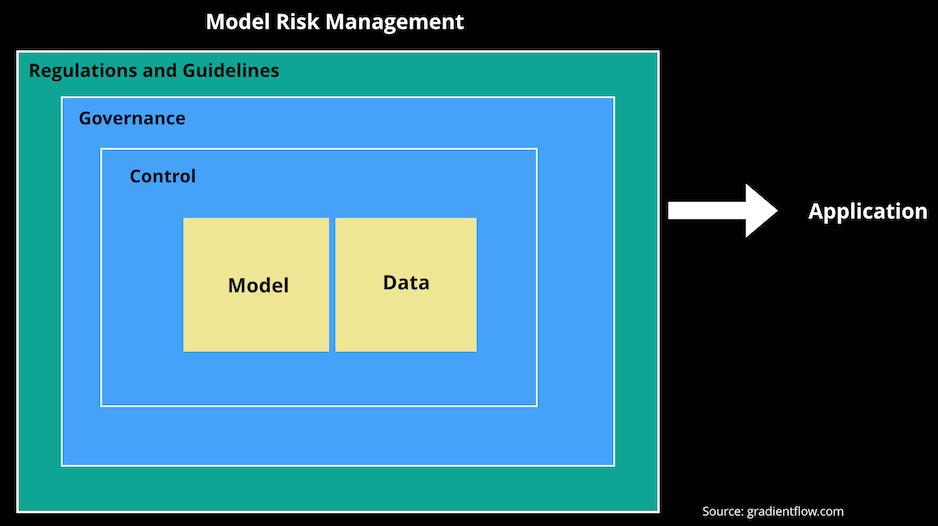 A contract for the Web

We all know the web has a boatload of challenges coming from a collection of commercial and national sources intent on subverting or replacing it. But organizations and consumers of the web have also been too complacent as these threats have grown. The World Wide Web Foundation‘s mission is to “advance the open web as a public good and a basic right.” by changing government and business policies. The foundation has just published a draft “Contract for the Web” and is asking for input from governments, businesses, and citizens. That’s right, they want your opinion. Read More

Is Web3.0 the next lifestyle brand?

Web 3.0 does not, and will likely never have, a canonical definition. Web 3.0 refers to a collection of aspirations, similar to those of the Web Foundations’, and new technologies to support those aspirations and a decentralized web, such as blockchain and crypto. Since these technologies are not widely understood, marketing Web 3.0 etc. is a problem. Jeremy Epstein has some “half-baked” (his words) ideas on relating it to modern intentional lifestyle choices as away to build support. Read More

By running unwitting PR for Jeffrey Epstein, Forbes shows the risks of a news outlet thinking like a tech platform

If journalists want to criticize the anything-goes ethos of Facebook, it’s only fair to note when news organizations’ hunger for scale leads them down the same problematic path. Read More