In the spirit of right-tool-for-the-job, our first two articles relate to the evolution of mobile and desktop platforms. There is a lot of, mostly rational, exuberance around the speed with which smartphones are taking over the world. But that is only possible because they are not limited to content in native apps and walled gardens. According to StatCounter, mobile is now responsible for more web page views than desktops. Its share will continue to grow because that is where most of the content will be. This is a metric that has been under-appreciated because of too much attention on usage time — access to all content is surely more valuable than limited content chosen by someone else, even if it is more engaging.

At some point we won’t need both desktops and mobile devices, but in the meantime they each have jobs they are much better at and will be the preferred tool for. Our second article looks at this in terms input devices, the new Macs, and Apple’s strategy.

… this doesn’t necessarily mean … that people are using their mobile devices more than their computers, it does for certain mean people are viewing more individual webpages on mobile browsers than they are on desktop versions. Read More 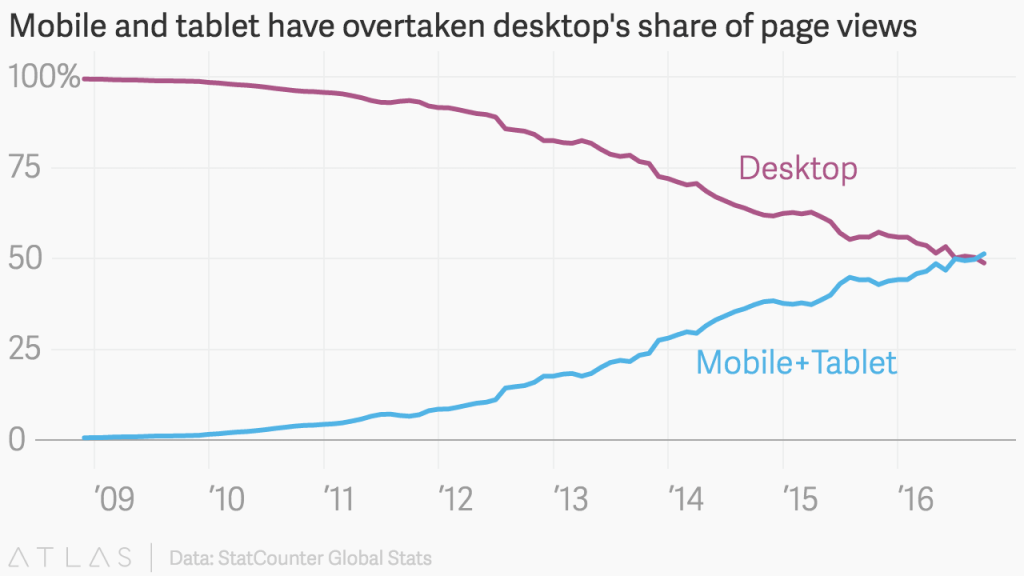 Horace Dediu explains how the new MacBooks fit into the mobile / desktop evolution and Apple’s strategy around it.

It cannot take on the role of being the future. That belongs to the touch screen devices. It will not morph into a touch device any more than a teen’s parent will become cool by putting on skinny jeans. What it will do is become better at what it is hired to do. … The key to the Mac therefore becomes that which the iPad/iPhone isn’t: an indirect input device. The keyboard and mouse/trackpad are what define the Mac. Read More

Once upon a time — and it was a time that lasted some thirty years — there was no better place for VCs to invest in the broad world of tech than enterprise software. This is no longer true, and the enterprise is missing out as a result. What’s an entrepreneur or VC to do? Read More

WeChat’s Next Step Toward a SuperApp

If you haven’t heard of Google “instant apps” you should look into it even though many think that they are a ways off. One reason is that WeChat is working on something similar for their 800 million users.

WeChat’s pitch to software developers is that instead of having to build one version of their app for Android phones and another for the 20% of Chinese who use iPhones, they can just build on WeChat to serve both sets of customers. And the use case will get strengthened as more users find it natural to stay within WeChat to open the easier-to-build mini-apps. That’s an especially attractive proposition as Chinese users are loading fewer and fewer apps. Read More

Sergio Maldonado has a guest post on Scott Brinkler’s blog and he is looking for debaters.

It all started with a beautiful idea. Cross-channel attribution (or “multi-touch attribution”) became a popular concept at the time when web analytics had just completed its journey from IT to the marketing department (circa 2008). Read More

Register today!
and use code F16G for an extra discount

How the Web Became Unreadable Yes, and continued variability of displays will exacerbate. via Backchannel