I had a chat with Larry this week on what people can expect from the enterprise collaboration track at Gilbane Boston this year/ (Last Day of Early Registration Discounts for Hotel & Conference Passes.

I have lots of great interviews recorded & scheduled so definitely keep an eye on our feed for a variety of very smart people from a diverse set of specialties and backgrounds.

Website Governance in the Enterprise- A Chat With Ian Truscott

October 15, 2010 / Scott Templeman
In case you missed it this week, I chatted with Ian this week regarding his latest beacon, Looking Outside the CMS Box for Enterprise Website Governance. It got broken down into 4 videos and promoted across our various video channels (Facebook, Youtube, and our main channel Gilbane.blip.tv). Also make sure you aren’t missing out on the popular posts over on the XML blog

I’ve embedded the videos below if you missed them:

Continue reading Website Governance in the Enterprise- A Chat With Ian Truscott. 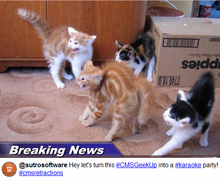