During the first quarter century of the commercial internet, digital journalism has already gone through three eras: the portal years, the search years, and the social years. Each era advanced storytelling and presented new revenue streams, but I would argue that digital journalism is now entering its most exciting period yet. Think of this as the stories as a service era, where journalism will be paid for by readers, for readers… Digital journalism has been commoditized, creating new market opportunities at the bottom of a new disruption curve that is not yet “good enough”. (italics added). Read More 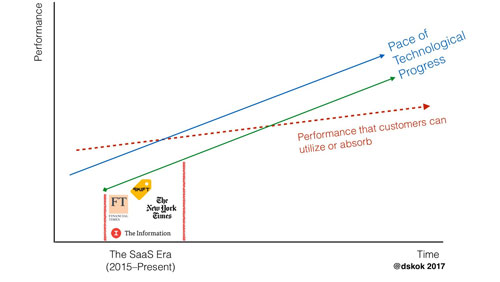 But aren’t Watson and Einstein competing? In short, the deal is about more data; it’s a complementary marriage of Watson’s broad unstructured data capability and Salesforce’s structured data focus on their application and customer experience. Well, that’s what caught my interest anyway. But there is more to it and James Governor sorts it out… Read More

Otto is the largest e-commerce merchant in Germany after Amazon. Their use of AI goes beyond pure marketing to reduce shipping, returns, and inventory costs, and improves customer experience. An instructive example of what is already being done with machine learning, and without human hands on, their system…

analyses around 3bn past transactions and 200 variables (such as past sales, searches on Otto’s site and weather information) to predict what customers will buy a week before they order… has proved so reliable—it predicts with 90% accuracy what will be sold within 30 days—that Otto allows it automatically to purchase around 200,000 items a month from third-party brands with no human intervention. Read More

MIT Technology Review is determined to keep the value of comments alive. Jason Pontin reports on his efforts and current strategy in this thoughtful and thorough piece. Read More

Facebook may have a monopoly in social networking, and while that may be a problem for Snap or any other would be networks, Facebook would surely argue that … society as a whole shouldn’t be too bothered… The problem is that Facebook isn’t simply a social network: the service is a three-sided market — users, content providers, and advertisers — and while the basis of Facebook’s dominance is in the network effects that come from connecting all of those users, said dominance has seeped to those other sides… Facebook passed Google as the top traffic driver back in 2015, and as of last fall drove over 40% of traffic for the average site, even after an algorithm change that reduced publisher reach… So is that a monopoly when it comes to the content provider market? I would argue yes, thanks to the monopoly framework above. Read More

The history of Instant Articles’ path to Instant Recall, via The Verge

For fun and profit… Alexa learns to talk like a human with whispers, pauses & emotion via TechCrunch

Nobody is going to own podcasting. Well, at least there’s that. via Doc Searls 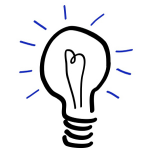 The Call for Speakers is Open!