The Facebook / Cambridge Analytica scandal is Facebook’s most serious crisis so far because it exposes the particular weakness of their business model at a time, and in a way, that can no longer be ignored by those who understood it, namely, investors and paying customers. There is no obvious fix that does not reduce Facebook’s value. And then there are the Facebook users paying with ‘only’ personal data – how many of these will now become woke? And what will they do? As Ethan Zuckerman, points out though, and the reason I singled out his excellent article, the problem is much bigger.

… Zuck didn’t mention that Facebook’s business model is based on collecting this demographic and psychographic information and selling the ability to target ads to people using this data about them… This is a known bug not just for Facebook and other social networks, but for the vast majority of the contemporary web. Read More

eMarketer estimates that the combined Google and Facebook share of the digital ad market will shrink from last year’s 58.5% to 56.8% in 2018 “as smaller players such as Amazon and Snapchat are experiencing faster-than-expected growth.” Also, Google and Facebook’s share of new digital ad dollars is declining… This year, they will garner nearly 48% of new expenditures.” Down from almost 73% in 2016. Read More 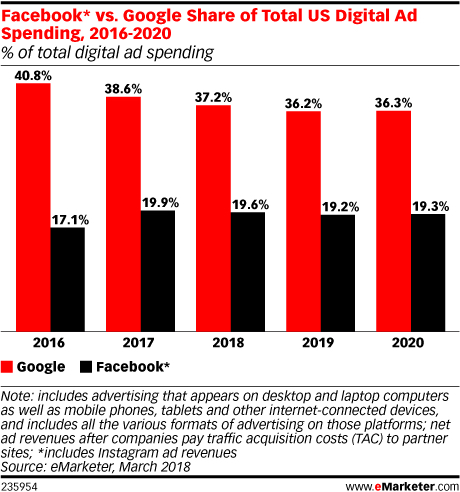 Google has been more successful than Facebook in working with publishers. And of course they need to be, for all the same reasons they need to support the Open Web. This week they launched the Google News Initiative to pull together all the relevant projects and partnerships into a coordinated effort and are committing $300m to fund the activity over the next three years. Self-interested of course, but lots to applaud here. Read More

Eager to sell your personal data?

Should marketers pay consumers directly to access their personal data? The idea isn’t new but it’s become more popular as people see the huge profits that Google, Facebook, and others make from using that data, as consumers become more aware of the data trade, and as blockchain technology makes low cost micro-payments a possibility.

David Raab takes a look at the current vendor marketplace, and reaches the realistic conclusion that “You’ll have to wait”. Good advice. Read More

The IAB and IAB Europe, which are charged with representing a much broader set of stakeholders including hundreds of ad tech companies, Google, Facebook, Oath, and many others with significant intermediary interests, has released its plan to handle the GDPR roll-out. The IAB framework, which was submitted for industry commenting, was clearly designed by ad tech companies and included endorsement from 23 ad tech companies and, most notably, zero publishers. Read More