SDL announced it entered into a technical partnership with DRUID, specialists in conversational AI, to launch multi-lingual virtual assistants for enterprise organizations that enable real-time communication through chatbots. By integrating SDL Machine Translation with DRUID virtual assistants, companies will be able to conduct chatbot conversations in different languages with employees, customers, partners and suppliers. The solution offers a real-time “interpreter mode” function, which can translate conversations along with “live chat” which can translate into multiple languages.

Chatbots are commonly configured to undergo complicated question-and-answering activities in different languages, but language-specific customization can be complex, time-consuming and costly. The issue becomes even more complex when a chatbot is connected to various data sources (ERP, CRM, BI, HRIS, or other types of business applications). With SDL Machine Translation, chatbots can converse in multiple languages without the need to translate data sources or conversational flows.

The official Google Translate for iPhone app is now available for download from the App Store. The new app has all of the features of the web app, as well as some new additions designed to improve translation experience. The new app accepts voice input for 15 languages, and—just like the web app—you can translate a word or phrase into one of more than 50 languages. For voice input, just press the microphone icon next to the text box and say what you want to translate. You can also listen to your translations spoken out loud in one of 23 different languages. This feature uses the same new speech synthesizer voices as the desktop version of Google Translate introduced last month. Another feature is the ability to easily enlarge the translated text to full-screen size. This way, it’s easier to read the text on the screen, or show the translation to the person you are communicating with. Just tap on the zoom icon to quickly zoom in. And the app also includes all of the major features of the web app, including the ability to view dictionary results for single words, access your starred translations and translation history even when offline, and support romanized text like Pinyin and Romaji. You can download Google Translate now from the App Store globally. The app is available in all iOS supported languages, but you’ll need an iPhone or iPod touch iOS version 3 or later. http://itunes.apple.com/us/app/google-translate/

TransPerfect, the privately held provider of translation services, announced the release of a new iPhone application for translation, which is available free to users. The application is called TransPerfect TransImage and it provides real-time machine translation via the device’s camera for users who come across text they would like to instantly understand. Machine translation has not yet advanced to a point where it can replace a human translator for mission critical content, but it can be an informative tool for getting the gist of content in another language. TransPerfect’s iPhone application leverages OCR (optical character recognition) and MT (machine translation) technology to form an application that takes text within a picture and translates it automatically. The current version includes support for 49 languages. The free application is now available from the Apple iTunes Store. www.transperfect.com.

SYSTRAN announced the release of SYSTRAN Enterprise Server 7, the company’s first hybrid machine translation (MT) server designed for enterprise use. Based on a combination of self-learning and linguistic technologies, SYSTRAN 7 delivers consistent translations that meet corporate customer requirements. Machine translation products have traditionally either been based on rules or statistical models. With the introduction of its hybrid MT product, SYSTRAN has delivered a solution that brings together the strengths of these two approaches. SYSTRAN Enterprise Server 7 combines the predictability and language consistency of rule-based machine translation with the fluency of statistical MT. SYSTRAN’s customization methodology includes the creation of dictionaries and the building of translation models from translated content. These tools supplement the out-of-the-box translation capabilities provided by SYSTRAN for 52 language pairs. SYSTRAN Enterprise Server has traditionally been deployed on corporate intranets as a solution for multilingual collaboration to help employees understand foreign language information such as emails, web pages, presentations and corporate documentation. SYSTRAN’s new hybrid MT engine enables enterprise customers to expand MT use for publishing. SYSTRAN Enterprise Server 7 offers reuse of validated translations through global content management workflows which allow users to create and manage multilingual content. By combining the latest linguistic and statistical techniques, SYSTRAN “learns” how words and phrases should be translated for specific domains based on existing human translations. As the data is re-used it gets “smarter” and updates itself. http://www.systransoft.com

MultiCorpora announced its newest version of MultiTrans. The newest version 4.4 of MultiTrans delivers WordAlign technology which allows users to instantly retrieve translated terminology from previously translated documents. This advancement in language technology was made possible through collaborative development efforts with the Canadian National Research Center. The newest version enables components of machine translation to be integrated into its software suite. This offers additional translation options for organizations who consider machine translation as part of their business model. MultiCorpora has also leveraged Oracle’s technology to recycle translations from over 250 file formats and shorten file conversion speeds. These new MultiTrans features dovetail with the turn-key, fully integrated workflow processes previously released in version 4.3 of MultiTrans (2007). http://www.multicorpora.com

When is a Wiki a Whiteboard?

A: When its a huddle.

Q: When is a huddle an environment for multilingual communication?
A: When a huddlee can dynamically change the user interface to work in her native language.

Q: Why is this interesting?
A: Because we’ve yet to see a concentrated focus on globalization requirements in the social computing and collaboration space. In fact, we’ve been wondering where is the “L” is in Web 2.0?

Q: What if you don’t speak German?
A: The company that built and manages the huddle concept (Ninian Solutions Ltd) provides a French user interface as well and according to our interview with the company, Spanish, Chinese, and Japanese will follow.

Q: So how will content created by huddlers get translated?
A: Machine translation may very well prove its use within a Web 2.0 environment. Stay tuned. 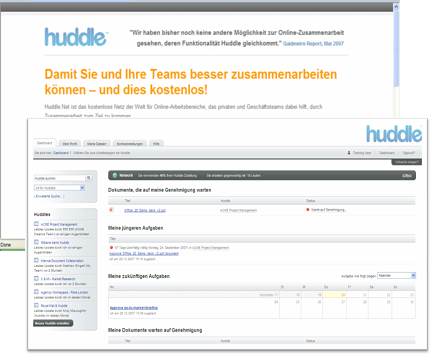 The Google Effect on Cross-Language Search

As the Internet continues to redefine ubiquitous, the issue of cross language search becomes more critical. It’s a pervasive challenge with extreme scalability requirements. Hard to imagine, but the Internet will be full by about 2010 according to the American Registry for Internet Numbers. ARIN’s recommendation for IPv6 demonstrates the potential breadth of information overload.

IMO, any discussion of what the interconnected world “looks like” in the future, whether focused on fill in your label here 2.0, social networking, customer experience, global elearning, etc., (should) eventually drill-down to translation and localization issues. Once we’re at that level of conversation, there’s more challenges to discuss — the ongoing evolution of automated translation, the balance between human and machine translation, the conundrum of rich media and image translation, and as Kaija will always remind us, the quality and context of search results as opposed to merely the quantity.

As a researcher, I’ve used Google’s “translate this” functionality and Yahoo’s Babel Fish (originally AltaVista’s) numerous times to “get the gist” of a non-English article. But my reliance on the results has been more for sanity-checking trends than for factual data gathering. Inconsistencies skew the truth. I just can’t trust it. Can we trust this? Time will tell. Is it a step in the right direction for the masses? No doubt.

SYSTRAN Software, Inc. introduced the SYSTRAN 6 line of desktop products, the latest release of their translation software products. SYSTRAN 6 supports the new Microsoft Windows Vista operating system and Microsoft Office System 2007. With SYSTRAN 6 individuals and professionals can translate and understand foreign language information, as well as create and publish in multiple languages in real-time. SYSTRAN 6 represents a major redesign of the desktop product line. Among the features are a built-in dictionary lookup, a translation toolbar, new linguistic options, and a new interface. SYSTRAN 6 includes five products, each targeted to an audience with unique translation needs: Web Translator is enables individuals to search for and find relevant foreign language information on the Web in real-time; Home Translator enables home users to translate text, Web pages and Microsoft Word documents; Office Translator is designed for Microsoft Office users to translate text, Web pages, documents and emails directly from Word, Excel, PowerPoint, Outlook, Internet Explorer, and Firefox; Business Translator is a translation solution for small and medium sized businesses to compete in the multilingual marketplace; Premium Translator is a translation software suite for creating multilingual documents and managing large translation projects on a PC. SYSTRAN 6 desktop products are available for download at SYSTRAN’s Online Stores and will be available in retail stores and the channel this month. Price per product varies according to the language pair or pack selected: SYSTRAN Web Translator, from $49 and up, Home Translator, from $99 and up, Office Translator, from $199 and up, Business Translator, from $299 and up, Premium Translator, from $799 and up. http://www.systransoft.com, http://www.systran.fr